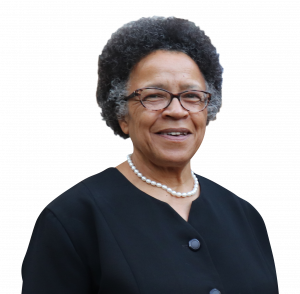 Dame Linda Dobbs DBE, BSc, LLM, PhD, served as High Court Judge on the Queen’s Bench Division from 2004 until 2013. She was the first non-white judge appointed to the High Court in the UK.  Dame Linda studied Russian and Law at the University of Surrey, graduating in 1976. She went to the London School of Economics and Political Science where she obtained a Masters in Law, followed by a Doctorate in Soviet criminology and penology.  She holds seven honorary doctorates in law.

She was called to the Bar in 1981 and had an extensive criminal practice, specialising in fraud, white collar crime and regulatory. In 1998 she was appointed Queen’s Counsel.

Dame Linda holds the following posts: – Judicial Commissioner at the Investigatory Powers Commissioner’s Office, The Independent Assessor for Miscarriages of Justice Compensation, Director of Training at the Judicial Institute for Africa based in the Law Department of the University of Cape Town and a Pro Chancellor at the University of Surrey. She is currently conducting a long-term review for Lloyds Banking Group.

“ I have a home in Cape Town. I am an honorary Professor at UCT and, when offered the opportunity to join the UCT Trust, I was delighted to do so.”

Higher education is facing a funding crisis again, compounded by the impact that the Coronavirus global...

"I like to feel in some small way that I am improving the chances of some talented young people to be the best that they can be."

"Throughout my professional life I have felt that I needed to pay homage to the high standard of education I had received at UCT, not only through the medical curriculum, but also by the inculcation of rational thought and analysis in the medical field. Inevitably this spills over into other spheres of life, and is what a true university education is about."

"We donate because we believe that high quality tertiary education is essential for South Africa's growth and success."