The University of Cape Town’s Baxter Theatre will be leading the southern hemisphere’s representation at the Edinburgh Fringe Festival, the world’s foremost arts festival.

The Rondebosch-based Theatre kicks-off their participation in the Scottish capital on the third of August. They will be performing over three blocks of dates (see the image at the bottom of this page for further info on the dates, venues etc.).

The legendary house of performance arts’ entourage is led by 2012 Edinburgh smash hit production, Mies Julie, written and directed by Yael Farber. It returns to the Assembly stage, following its unprecedented international success.

The others are Karoo Moose – No Fathers, The Inconvenience of Wings, Tshepang, The Fall and Tobacco. See below some of the raving reviews on each.

KAROO MOOSE – NO FATHERS
“It’s the sort of thing everyone should see at least once in their lives, it will change you forever” – City Press.

TSHEPANG
“There’s a richness and subtlety in Lara Foot Newton’s script that has not been seen in South African
new writing in recent years.”- Critic’s Choice, Time Out, London

THE FALL
“This play immediately belongs to the realm of Theatre of Testimony trailblazing the genre of
Theatre for Social Justice – South African style.” – Cape Times.

TOBACCO
“…this is sophisticated theatre-making that probes complexities, while even titillating and
entertaining the audience.” – Sunday Independent (South Africa). 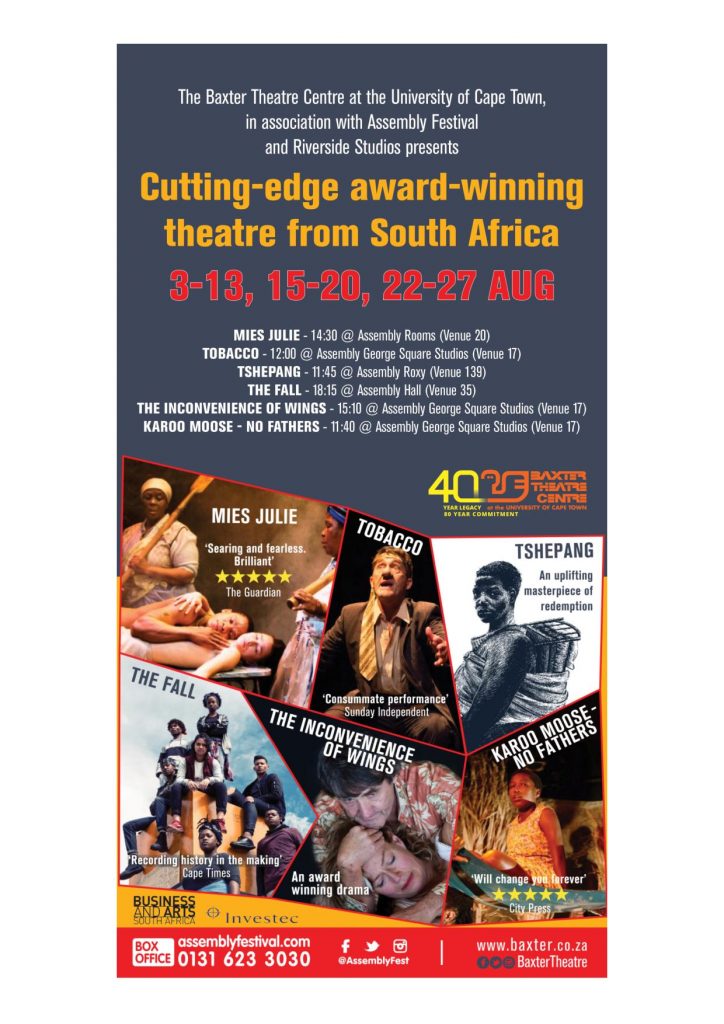