Nobel Laureate Sir Aaron Klug retires Sir Aaron Klug OM FRS, one of the founding Trustees of the UCT Trust and Chair- man since 1993, stood down from the Bo ard this year, and was awarded the Vice -Chancellor’s Medal in London by Dr Max Price. Price paid tribute to Sir Aaron’s “enormous contribution” to UCT over the years, during whic h time over £17 mil- lion was raised for projects at UCT. After receiving his BSc degree at Wits, Sir Aaron studied crystallography under Professor Reginald William James at UCT, and obtained an MSc degree. His PhD followed at Trinity College, Cambridge and in 1982 he became Nobel Laureate in chemistry, was knighted by the Queen in 1988, held the position of President of the Royal Society from 1995-2000, and became OM in 1995. He was also awarded the SA Order of Mapungubwe (Gold). 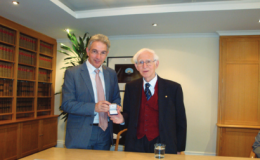