Minister of Higher Education, Science and Innovation Dr Blade Nzimande has pledged help from his department’s flagship funding agencies, the National Research Foundation (NRF) and the National Institute for Humanities and Social Sciences (NIHSS), to digitise and restore the University of Cape Town’s (UCT) library assets.

This follows the 18 April fire that destroyed Jagger Reading Room and damaged other buildings. Dr Nzimande also promised to assist students whose research had been disrupted by the fire.

The minister made the offers during a debriefing on 14 May after he and a ministerial delegation had toured three of the worst-affected buildings on upper campus. Nzimande was accompanied by UCT Chancellor Dr Precious Moloi-Motsepe, Vice-Chancellor Professor Mamokgethi Phakeng and members of UCT’s executive and Leadership Lekgotla. 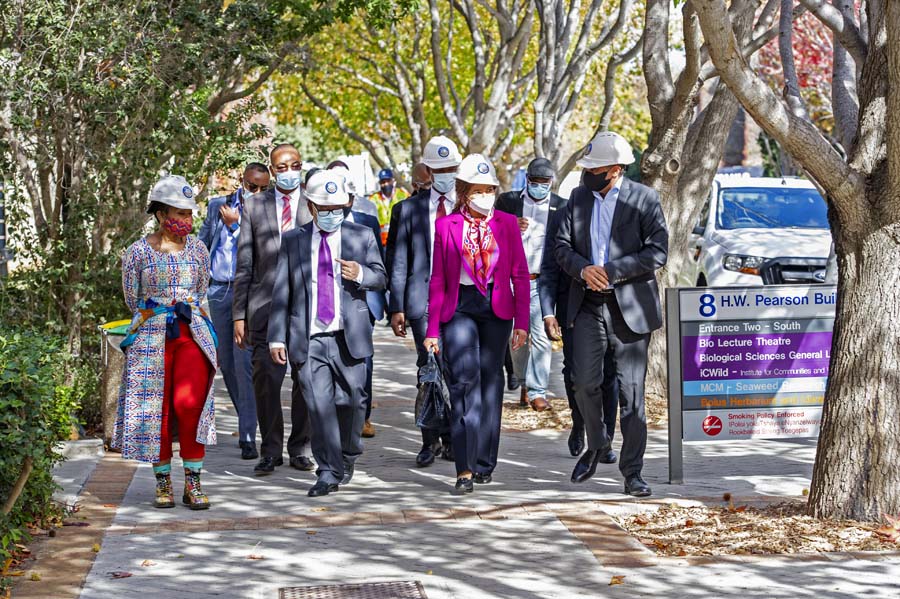 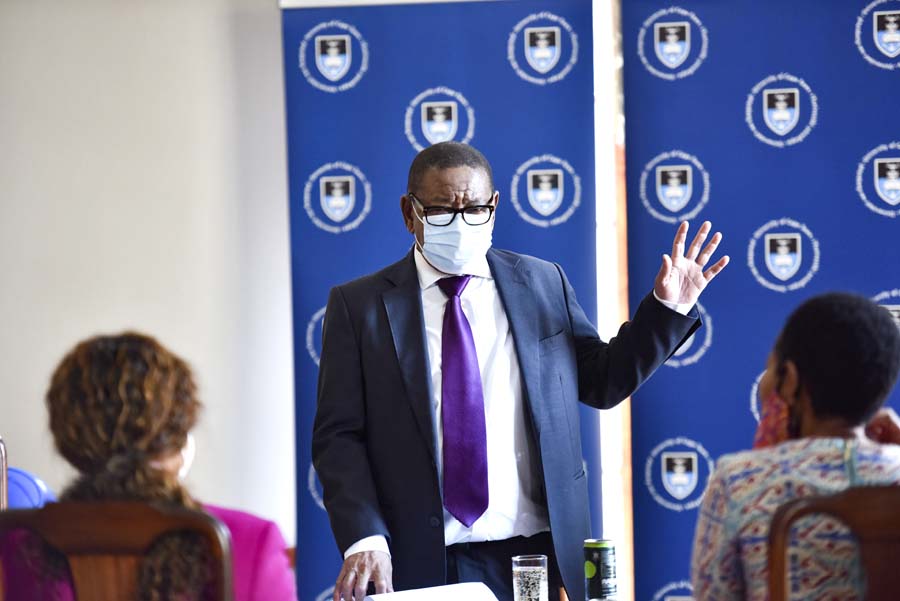 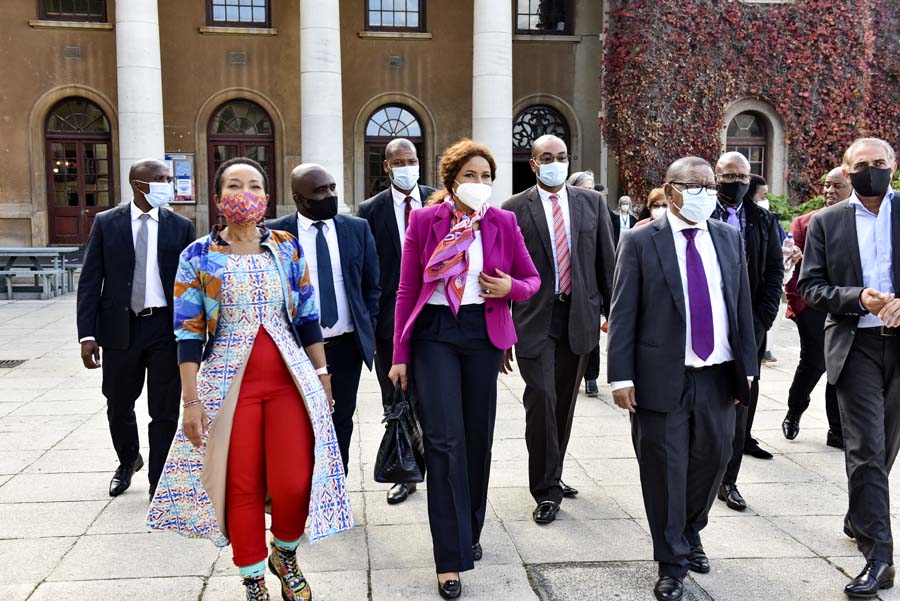 The minister and his delegation were accompanied by UCT’s chancellor, Dr Precious Moloi-Motsepe, Vice-Chancellor Prof Mamokgethi Phakeng, and other members of UCT’s executive and Leadership Lekgotla.

The minister commended UCT on its swift action in safely evacuating residence students, as well as those working on UCT’s upper and middle campuses at the time. He also commended the wider community for the many ways they had supported UCT.

After visiting the remains of the Jagger Reading Room, Nzimande visited the triage centre, where material salvaged from the library is being ‘resuscitated’, followed by Smuts Hall residence and the HW Pearson Building, which houses the Bolus Herbarium, South Africa’s oldest functioning herbarium. This was largely spared, while the laboratories of the Plant Conservation Research Unit, an interdisciplinary institute focusing on the interface of human and wildlife interaction – iCWild, among others – were destroyed.

It was the first time the UCT executive had been able to access these buildings to inspect them. Standing in a roofless, burnt-out Jagger Reading Room, with only the masonry core of its walls and pillars standing, Nzimande remarked sadly that he was reminded of the Colosseum.

In the debriefing, he said that the catastrophe had been a “blow to the country’s heritage”. And, he said, the event is a red flag to all the country’s university libraries which, like the Jagger Reading Room, held irreplaceable historical materials.

Nzimande said he had mobilised the NRF and NIHSS, who agreed to cooperate and work with UCT to reconstruct the library and its materials. Professor Phakeng said UCT would gladly accept this offer and would be exploring possibilities with the department.

While a monetary value had not been attached to this assistance, Nzimande said the NIHSS and NRF would engage with UCT and assess what was needed. Digitisation would be prioritised, as part of the Fourth Industrial Revolution.

“We are not in an era of rich government,” the minister said, “but within the context of what is feasible from the side of those two institutions, they will be able to do something … and where additional funds are needed, we will try and reach out.”

He added that UCT’s wealthy alumni were an advantage at this time.

Importantly, the partnership between UCT and government would form a pilot project for a larger national campaign to preserve and digitise the country’s heritage “treasures” and make these available to the world through open access.

“As Minister of Science and Innovation also, I’ve been convinced that open science is the way to go,” he said in the debriefing. “Open libraries are part of open science … Even COVID-19 has taught us that.

“It means I could sit in Kigali, anywhere, and be able to access materials here,” he added.

By rebuilding UCT’s Jagger Reading Room as a digitally accessible, open resource, it would become a “truly South African library”, globally accessible to anyone.

“[This is] in line with the prestige that UCT has as one of our premier universities, respected worldwide,” said the minister.

Nzimande also promised to assist students whose work – particularly laboratory projects – had been affected by the fire, and who would need to extend their study time and their departmental funding.

“We wish you strength; you’ve got my support. We’ll do whatever we can with our diminishing means as government.”

In her response to the minister, Dr Moloi-Motsepe said she was proud to see how the staff, the executive, the students, the public at large, and the Department of Higher Education, Science and Innovation are supporting the university. 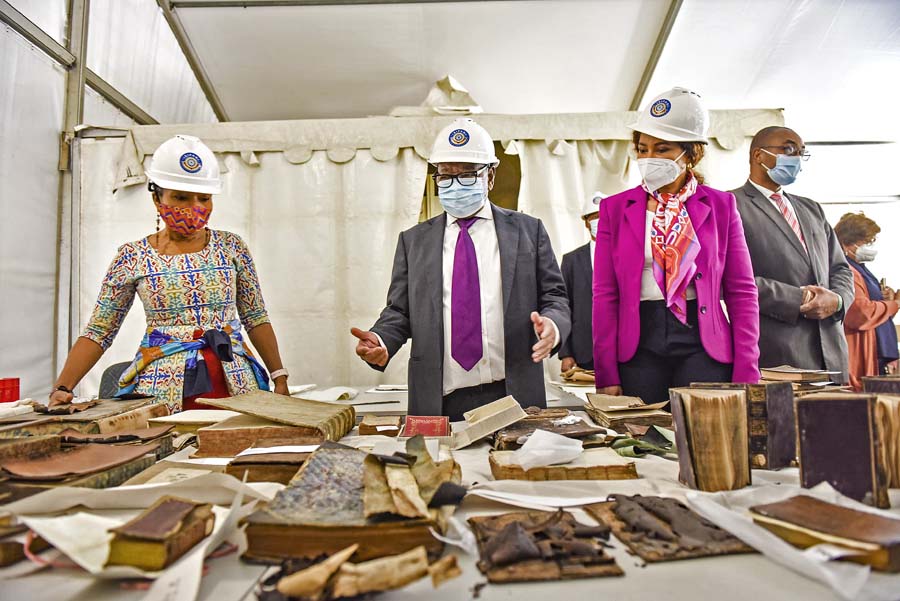 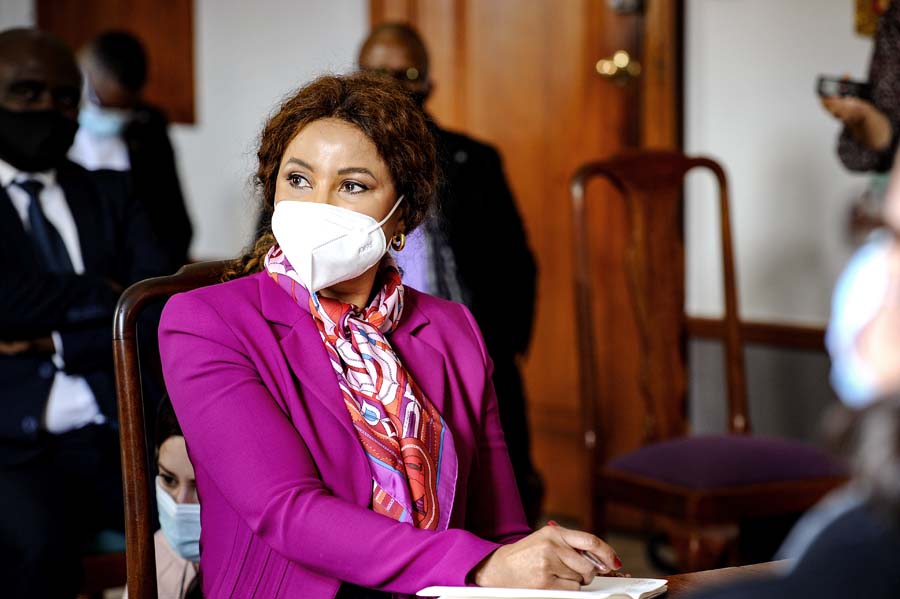 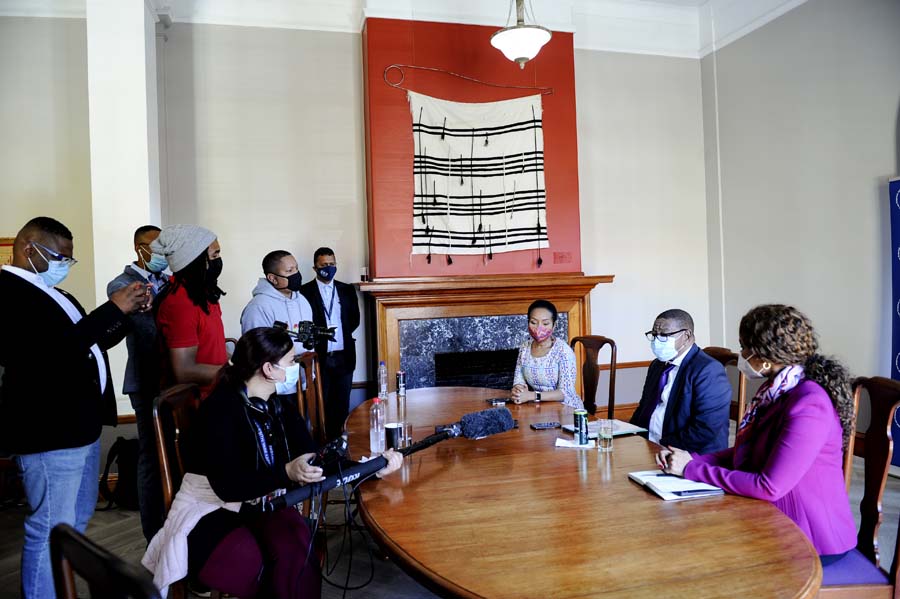 Chancellor Dr Precious Moloi-Motsepe said she was proud of how staff, the executive, students, the public and the Department of Higher Education, Science and Innovation had supported UCT.

“Seeing the public – ordinary people – helping with food and helping our firefighters to put out the fires – and within the Western Cape government, the premier, the mayor and everybody who came to give us support, has been absolutely amazing.”

“There is a strong, interconnected relationship that has always been there. But this fire pointed to this important interconnectedness.”

The chancellor said that the minister’s promise of assistance emphasised the importance of the relationship between communities and universities, which are a public good: “There is a strong, interconnected relationship that has always been there. But this fire pointed to this important interconnectedness.”

In her response, Professor Phakeng thanked the minister for his support and said that UCT would use the crisis to “build back better”; and that open access (research data freely available on the Internet for downloading) and open science were already on the table at UCT.

In an aside, the minister also indicated that the department would revisit the national site licensing issue, which will enable this access.

In rebuilding UCT’s Jagger Reading Room as a digitally accessible, open resource, it would become a “truly South African library”, globally accessible to anyone. Several collections have already been digitised and are accessible from the Special Collections website.

“In African culture, when you have a happening like this … it is really comforting to see the minister here with us,” said Phakeng.

“And what’s so special about today [is that] for the first time, we’re able to walk into the buildings that were damaged.”

After the minister’s tour, Deputy Vice-Chancellor for Research and Internationalisation Professor Sue Harrison elaborated on open access at the university: “UCT currently houses an open access publishing platform, and is in the process of extending this. UCT’s OpenUCT and ZivaHub platforms promote both open access and open data.

“At the same time, we are running pilot projects to explore the bringing together of digitisation and appropriate curation for the humanities, fine arts and performance. Working through the minister’s offer to enhance and accelerate our digitisation programmes is of major importance to UCT.”

In his parting message to students affected by the fire, Nzimande said the visit to the Jagger Reading Room and other buildings reminded him what universities such as UCT offered to students.

“It is important to preserve our universities; universities are the life of a nation … And I always encourage students to say, grab this opportunity with both your hands … especially students who come from poor and working-class backgrounds [who] are supported through government funding.

“Opportunities to benefit at an institution like this come once in a lifetime. I must also thank the students for the way they cooperated, in accepting being moved and tolerating the inconveniences.”