Believing in the principle that strong educational institutions ensure a country’s global competitiveness, Richard Gnodde has been a generous donor to the University of Cape Town over several years.

He was one of the pioneer donors to the Distinguishing UCT Campaign at its inception in 2014. With his wife Kara, also one of UCT’s alumni, he has championed the value of building strong endowments that enable universities to sustain the pursuit of excellence.

As a Bachelor of Commerce (BCom) student at UCT in the early 1980s, Richard appreciated the dedicated teaching and research that met a standard of excellence he believes the university maintains today, all amidst the unforgettably picturesque setting of the UCT campus. 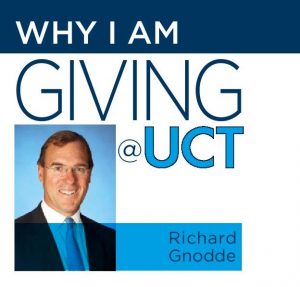 He was also a keen rugby player and represented the university on the under-20 team. A fulfilling university life, balancing academics and sport, yielded loyal friendships that are still important to Richard today, in and out of South Africa.

After going on to complete a Master of Arts degree in Law from the University of Cambridge, he began what turned out to be a formidably successful career with Goldman Sachs and, after 30 years, is now a Vice Chairman of the firm and Chief Executive Officer of Goldman Sachs International.

Richard respected two guiding philosophies following his years of study: striving for the highest standards in everything, and the value of seeking innovative solutions. The entrepreneurial path that he has followed in his career as an investment banker reflects these beliefs.

It has taken him across the globe, including a decade of leadership for Goldman Sachs in Asia. His rewarding contact with young people all over the world has constantly reinforced his belief in the need to participate in the development of young talent at universities such as UCT.

Richard has unswerving faith in the power of investment in human capital: empowering individuals to achieve their academic goals and embark on careers that establish them as globally renowned experts. This underpins his commitment to the idea of building a strong endowment, freeing up financial resources so that the university can offer more bursaries and scholarships.

It enables students, who would otherwise have followed compromised career paths, to fulfil their true potential. The Distinguishing UCT Campaign presents an opportunity for UCT to ensure that it builds on its success and maintains its standing as the leading university on the continent.

As UCT celebrates its long history, Richard is keen to see the university play a key role in the next chapter of South Africa’s development, especially during these times of global political uncertainty: “It is my hope that we are instrumental in producing students who emerge as influential leaders, stimulating and participating in the important debates about our future and making sure the country gets to where it needs to be.

If we believe in South Africa and we are passionate about the country succeeding, then we must invest in educational institutions. We need to continue providing an environment where the best and the brightest minds can be challenged and go on to make outstanding contributions in their fields, both in South Africa and all over the world.”