The Baxter Theatre Centre turns 40 this year, having opened its doors on 1 August 1977. In preparation for this milestone it has launched an exciting fundraising drive called the 40/80 campaign.

The space came into being through a bequest by the late Dr William Duncan Baxter, who earmarked R553 866 to set up and finance the project.

Baxter envisioned a space that would “develop and cultivate the arts in Cape Town and the adjacent districts for all artists”.

Now, four decades later, the theatre has launched a funding campaign to secure its future and make it possible to deliver another 40 years of theatrical excellence.

A time of divisions

The theatre was built during a time of entrenched racial divisions. The Publications and Entertainment Act of 1963 separated black and white audiences.

South African actor, director and playwright Dr John Kani wrote: “The Baxter Theatre opened its doors during the most difficult time of our history in our country. There were no theatres in Cape Town in the 1980s that would take the risk of presenting works by black artists. The Baxter Theatre became the only theatre that allowed the alternative voice to be heard especially from the black communities.”

It was decided against building the Baxter in the Cape Town city centre, where it would be inaccessible to people of colour. The University of Cape Town was selected as a strategic location for a theatre that hoped to open itself to all.

“Because of the Baxter Theatre’s fortunate location, situated inside the grounds of the University of Cape Town, they could present and produce the so-called ‘protest theatre’ plays,” Kani explained. These included pieces such as Sizwe Banzi is Dead and The Island.

There are a number of misconceptions about the Baxter’s finances that have proven to be barriers to the centre’s fundraising efforts. 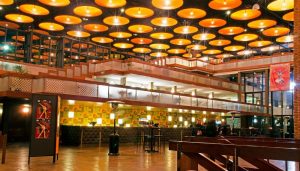 “UCT covers approximately 40% of our operational costs and we have to raise the remainder ourselves. The Baxter is a UCT project and we get considerable support from the university. However, they cannot give us all that we need to do our work,” explained CEO and artistic director Lara Foot.

UCT meets the costs associated with the Concert Hall, which functions primarily as a teaching and performance venue for the South African College of Music. It also contributes an annual operating grant, to cover part of the Baxter’s infrastructure costs.

“The Baxter does not receive any funding from the national government or from the National Lotteries Commission. It is not considered a state entity and is not eligible for funding, and for the past 10 years the lottery has denied funding due to our association with UCT,” continued Foot.

The theatre hopes to turn this around with the 40/80 campaign: ensuring that the Baxter’s 40-year legacy of theatre excellence becomes an 80-year commitment to the same.

All money raised through this initiative will go directly into the theatre’s Endowment and Production Funds.

Click HERE to make a donation to UCT through the UCT Trust in the UK.