From rebranding the Dutch Postal Service to playing a role in transforming the Coca Cola brand, Raymond van Niekerk has not only left an everlasting mark on the world of branding and marketing but he has also been credited with bringing a ‘friendly’ face to investment banking in the UK, South Africa and indeed globally.

Thapelo Moloantoa recently interacted with the former Global Marketing Head for Investec at the inagural Investec Executive MasterClass seminar in London. The event, a part of the University of Cape Town’s Graduate School of Business (GSB) FoundationSeries Executive MasterClass, was hosted by Investec UK’s head office.

The GSB Adjunct Professor is now a consultant for the specialist banking and asset management group.

Tell us about your early days at Investec.
Investec entered the UK market in 1986 and at that point their market entry strategy centred around acquisitions in the asset management space, and in investment banking sector, albeit on a small scale.

I only joined them in 1999 but prior to that their focus was on settling into the market, so they were only engaged in some small scale marketing. The first major marketing investment that the group became involved with in the UK was in 1999 when a sponsor pulled out of a South Africa against England rugby match.

This was at a time that I had just joined the company and we decided to go for the opportunity to sponsor the match because we were positioning ourselves to leverage on the simultenous television exposure to the South African as well as the English market.

How has your experience of working with Investec as an investment and banking entity been, comparative to your experience of working in other sectors?
It has actually been a breath of fresh air because prior to that I had worked across many industries – whether it be financial services, petroleum and gas, luxury services and goods, retail and many more.
What I found interesting with working for Investec was that I had come into the space of an interesting brand that was populated by people who are incredibly talented. Banking is a highly regulated industry so it is highly sensitive because you are dealing with issues that affect people’s lives and their livelihoods which means their very existence.

It affects the economies of countries and so forth, so there is not so much of a tolerance for failure.

But if you must be risk-averse then you might stifle capital flow so there is no financial capital lubricating the system. People need money to operate, so if you are in a highly regulated environment you find that consequently people become a lot more conservative and when you become conservative you find that you become massively risk-averse at almost everything.
So you become ‘safe and boring’, which is generally what people think of the investment banking sector.

Yes the ‘safe and boring’ is necessary but it doesn’t mean that you should not have fun while doing it. You need to hire people who are multi-dimensional so to them the work is not everything. They should be the type of people who go home and have interesting hobbies, they put family first.
The important factor is to have fun while being responsible, and not at the expense of being responsible.

How has your experience of working on campaigns across different country markets been?
Actually it has been a roller-coaster of a journey. Things do get difficult across time zones, across different currencies etc. However, my experience has indicated that one has to have a fundamental way of doing business, that is what I refer to as a company culture.

The key is to keep true to what your organisation is about, that is, your way of conducting business. For instance, Investec has a way of doing things, and simultenously it also needs to be open about how a unique local context will influence its way of doing things. However, being open about this does not mean that it has to be held prisoner by it. 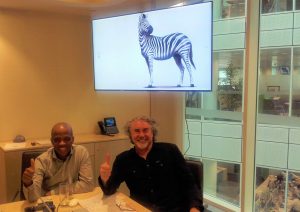 Say for instance, in China the colour red is a colour of good fortune and the number 8 is a lucky number, you don’t go out there and put 888 and red on all your company branding, thinking that this is a short cut to market entry. Your enterprise has got to be strong enough to fight for what is true to the essence of the company.

Be sensitive to the local nuances but don’t be kept prisoner by them. Human beings have more in common with each other despite racial, cultural, religious and other differences.

Another factor is not be intimidated, don’t be afraid to enter into new markets. You will make some mistakes but don’t be afraid of it, just go and do it . Understand that it is not easy to enter new markets. Be fully aware of the fact that it is going to be highly competitive. Many UK or South African corporates open up business in Australia but suddenly realise that the Australian market is a relatively a closed market. So do not underestimate the local nuances.

How did the Investec sponsorship of The Derby, the prestigious horse race dubbed as ‘the greatest flat race in the world’, come about?
We were approached to sponsor the Derby after a previous sponsor had withdrawn. We thought this was good value for money, it would be a perfect fit that would help us to reach our target audience. To align ourselves with a prestigious, historical brand which has been around for 237 years was an incredible opportunity, it is part and parcel of the British social fabric. So for Investec to be able to acquire an association with the brand was a one-in-a million opportunity. It complemented the audiences that the company’s sponsorships of Tottenham Hotspur and the England Women’s Hockey team spoke to.

Critics in the investment banking industry were unsettled by the Investec sponsorship of Premier League club Tottenham Hotspur, that is, given the general perception of the average football fan not necessarily forming a part of an asset management firm’s target market. What’s your take on this?
Yes that is true to a certain extent. However we looked at it from a different perspective. Firstly the general perception about the average football fan is somewhat misconstrued. Research has shown that there are large numbers of members of the elite and middle classes who are in fact football followers, both here and abroad.

Who do you think is buying all the expensive season tickets?!

Secondly we did not have the capability to run campaigns in every market that we had targeted and so we needed to identify a platform that would enable us to scale our reach.
We found that platform in the Premier League and the UEFA Champions League, who can reach an average of 200 countries with a single match. Of course not all the people watching will be interested in asset management but a significant number of them will be. And so that is how the association with Tottenham Hotspur came about.

Tell us about your involvement with the rebranding of Coca-Cola in the 1990s.
I was working for a South African founded company called KSDP Pentagraph. They have offices in Johannesburg, Cape Town, London, Sydney, Dallas and Amsterdam. It was a fascinating company to work for, we had the upside in the South African operation because we had an astonishingly creative talent pool, coupled with the fact that South Africa costs so much lower than London or Amsterdam.

So our ability to compete was boosted because we had talent on the creative side combined with a low cost base. We could deliver high quality services to international clients at a lower cost. So the regional Coca-Cola office had Pentagraph on retainer working for them. That relationship blossomed so well that we, in fact started working on their international products, and at one point in the 1990’s we were directly involved in the rebranding of their logo, which was absolutely fantastic and rewarding for our careers.

Which other international brands have you worked on?
There are just too many to count. From the likes of Audi, ABN Amro Bank, rebranded Dutch post office out of Joburg, Volkswagen, Dunhill, Levi-Strauss, TNT Logistics, and more. I have also worked with marketing and branding campaigns for every parastatal in South Africa.

Some people have compared your social life to that of Richard Branson especially since both of you are marketing gurus..what’s your take on that?
To a certain extent it may be that we share the same vigour for an outdoor social life but I can’t say I reach the extremes that he does. Since I was a child I’ve always been into reading, I read non-stop and that will never stop unless my eyes give in. I cycle occassionaly, and I go on hikes so I spend a lot of time outdoor. I’ve recently started with kite boarding. I like motor-cycle and this has taken me to the deserts of Rajasthan, the Himalayas, the sandy outback roads of Botswana and such other places around the world.

I often sail as well, but not very often because it sometimes take too much effort to organise a crew and also the wind in Cape Town can pose a life danger because it can be too strong for sailing.
I also take trips with my family to historical places..we’ve driven through Cuba with my children, been to the Vatican with them too. I’ve sat and stared at massive spaces on the Himalays. So I like adventure but not too extreme like Sir Branson.

Thank you very much for your time, and wishing you all of the best going forward.
Thanks, I wish you and the UCT Trust UK team the same

*You may view images from the seminar here