It is with much anticipation that the UCT UK alumni community awaits the keynote address to be delivered by world-acclaimed swimmer, environmentalist, motivational speaker and UCT alumni Lewis Pugh at the Law Society in London on Tuesday, 20th September.

In 2010 he was named a Young Global Leader by the World Economic Forum for his “potential to contribute to shaping the future of the world through inspiring leadership.”

In 2013 the United Nations Environment Programme appointed him “Patron of the Oceans”.

Pugh tells all about his inspirational story below, in his own words:

“My decision to become an ocean advocate didn’t happen all at once. It began with the stories of exploration I loved as a child, and in the flights of imagination sparked by the world maps my father hung around our home. I was fuelled by friends like David Becker, who knew there was something else for me besides being a young London lawyer.

‘Follow your own dream in life, Lewis’ he told me, ‘or you’ll be following someone else’s’. I am so very grateful to him for that.

It was in the sense of achievement I felt after my very first Robben Island swim at just 17 years old. That taught me that finishing a job gives you the power and the energy to go on to even bigger things.

Most importantly, it was in the way the natural environment influenced my development. I was awed by my first experience of real African wilds. I was awed in a different way in the Southern Ocean, when I found myself swimming over a graveyard of bones at Whaler’s Bay.

I remember my father telling me about the first British atomic bomb test; when he held his hands over his face he saw the bones as if through an x-ray. If this is what a nuclear explosion does to us, I thought to myself, imagine what it is doing to the environment? 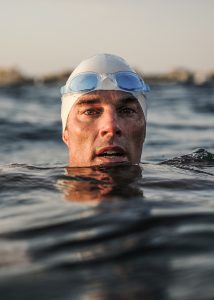 By swimming in vulnerable ecosystems, I want to draw attention to the impact of our actions on our oceans. I’ve seen enormous chunks of ice slide off Arctic glaciers. I’ve swum over bleached coral killed by rising sea temperatures, and over the bones of whales hunted to the edge of extinction.

I’ve visited lakes high in the Himalayas where once there was only ice. And I’ve seen plastic pollution in the most remote parts of the oceans, hundreds of kilometres away from human habitation. I’ve witnessed drastic changes in my lifetime – changes that have come about because of our actions.

In my lifetime I’d like to see us change. Because we have it within our power to make a positive difference.

When you are truly doing what you love, the sense of purpose is immense.

And absolutely nothing seems impossible.

I dream of oceans that are abundant with life, full of dolphins and whales, of penguins and sea birds, of turtles and manta rays. I believe that we can restore the health of the oceans. But it’s up to you and me to take positive steps to ensure that the future of our oceans are protected.