UCT alumnus Pretty Yende recently added yet another feather in her cap as she made her debut at the Royal Opera House in Covent Garden in London.

About one hundred alumni and friends came along to enjoy her performance as Adina in Donizetti’s “L’Elisir d’Amore”.

The decorated songstress, originally from the small town of Piet Retief in the north of South Africa, Yende received rave reviews from leading media publications in the UK, including Financial Times and The Times. See the reviews below: 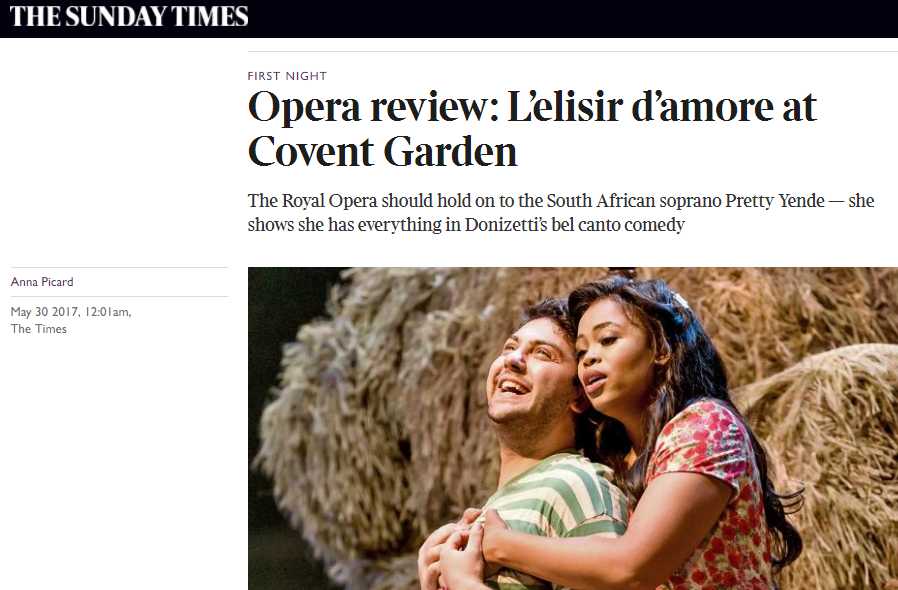 “This was Yende’s Royal Opera debut and if the company has any sense, it should hold on to her as tightly as Avetisyan does on stage. The South African soprano has everything: a lovely, breezy sound, faultless agility, stamina, charm and a terrific, tireless appetite for the hiccups and backflips of Felice Romani’s tongue-twisting, heart-squeezing libretto.”

“The remarkable wave of young singers coming out of South Africa has been one of the major causes for rejoicing in the world of opera over the past few years.

Aside from visits by the Cape Town Opera, we have seen too little of them in the UK, including at the Royal Opera House — until now.

With appearances in many of the world’s major opera houses behind her, Yende arrives for her Royal Opera debut well-schooled in the bel canto style, singing with easy agility and touching in her top notes delicately. She also decorates her music, modestly and with charm.

“Pride of place must go to South African soprano Pretty Yende, a rising star on the international scene, whose musicianship and technical skills are first-rate, and who makes proud, educated landowner Adina’s eventual realisation that she loves shy, not overly bright, Nemorino deeply affecting.

“Together with some fascinating detail, the general excellence of her performance keeps her right at the centre of attention.”